David Collison was born in Ipswich in 1937. He left school at the age of 15 and went to work in the linen department of the largest store in the town. This was not a happy period. At 17 he managed to get a job as an assistant stage manager at the Arts Theatre Club in London. He had a particular aptitude for spot-cueing music and effects on 78 rpm records and this led to and interest in recording sound effects.

In 1959, he joined lighting designer Richard Pilbrow’s fledgling company, Theatre Projects, and set up a recording studio in Neal’s Yard. Here, tailored sound effects were created for countless productions in London and around the country, including for Sir Peter Hall at the Royal Shakespeare Theatre and, later, for Sir Laurence Olivier at the National Theatre.

In 1963, he worked on his first musical and became the first person in the UK to be known as a Sound Designer. During the following 23 years he was involved with more than 50 major West End musicals, plus others in Denmark, Sweden, South Africa, and the United States.

As a consultant, he designed permanent sound systems for the National Theatre, the Barbican theatre and many other theatres and concert halls in this country and abroad - inaugurating a number of technical innovations.

In 1988, he left the theatre and formed a company called Adventure Projects. This was to use his theatrical talents for the creation of themed visitor attractions, two of which received English Tourist Board Awards for Excellence.

In 2007, he was honoured by the USITT (United States Institute for Theatre Technology) with a Distinguished Career in Sound Design Award. In 2013, he received an Honorary Fellowship from the Royal Central School of Speech and Drama.

As an author, he has written two acclaimed books on theatre sound (Stage Sound and The Sound of Theatre), plus a humorous book describing the problems of trying to restore and build houses in Southern Spain (Are We Driving Up The Right Riverbed?). His latest book (Namedropping in the Wings) is a light-hearted memoir of his career in the theatre.

David was married to actress Annie Dodd in 1974 and they had three children, Mark, Dominic and Robin. Sadly, the marriage ended in 1984.

In 1986, he was responsible for writing and directing a play for the Polka Children’s Theatre in London based on Hans Andersen’s The Tinderbox. The actress he cast as the Princess, Alison Neil, later became his wife. They now live in the Forest of Dean and spend up to three months a year in their house in Andalusia. Alison continues to write and perform her renowned one-woman plays and David directs the shows for which he has been known to create the sound effects. See details at: www.alisonneil.co.uk 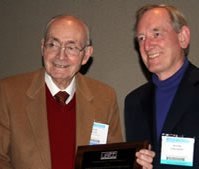